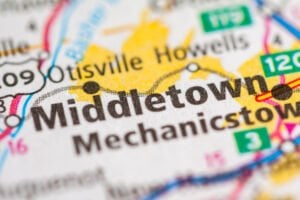 Middletown lies in New York’s Hudson Valley region, near the Wallkill River and the foothills of the Shawangunk Mountains The city has an estimated 2015 population of 27,812. The economy of Middletown is supported largely by service and retail, with a regional medical center a major employer in the area. The city is located near the intersection of Interstate 84 and NY 17, which are both busy higways and full of commuter traffic. The crime rate in Middletown is 54% higher than the remainder of the state of New York and 1% lower than the nation’s average. This means residents should take the time to explore all the options for cheap car insurance Middletown has to offer. The average commuter in the New York-Newark area spends 60 hours a year stuck in traffic, and Middletown drivers need all the protection they can get when on the road.