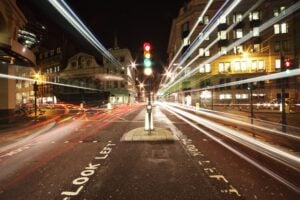 There is nothing more frustrating than sitting in a long line of cars waiting for the light to turn green. Except when you have to sit there waiting through 3 more signal changes before you get to actually go through the intersection. There is also never a more tempting time to break the law then when you are sitting at a stop light for five minutes and there’s not another car in sight. Those are dumb lights! The future looks like a green light though, as artificial intelligence takes over the streets.  Smart traffic lights are now being used in various cities across the state and have proven to lower time spent idling in traffic by 40%. They are also a green light for our environment as they may be able to reduce emissions by as much as 21%. The cost of fuel, the value of time wasted, accidents, and lost business added up to $124 million dollars in 2013. Smart light technology can reduce all these costs and be a means to cheap car insurance as well.

In most cities traffic light effectiveness is limited to induction loops embedded in the asphalt. This kind of light can sense when there is a lone vehicle waiting on a rural side road and change the light to green.  It cannot, however tell the difference between one car and a mob of cars that will create a traffic jam.

A slightly more up to date system involves a person sitting in front of a bunch of computer monitors. By using information from regular traffic lights, phone calls from citizens driving around town, and various charts and historical graphs, he/she can adjust the flow of traffic.

Smart lights take traffic control to a whole new level. Using fiber optics, cameras, sensors, chips and software, these lights monitor vehicle numbers and make changes in real time, making a real difference. Companies like BMW and Siemens started helping develop the technology almost ten years ago. Just this year in March, John F. Hart Jr. patented a control system that detects traffic coming toward and intersection and anticipates what is needed to keep the traffic flowing efficiently. By using sophisticated algorithms each light develops a plan to optimize traffic, and then sends the information outward to other lights, creating a whole network that works together. The algorithms can also be programmed for the particular needs of each city. It can prioritize improving pedestrian flow, or stop traffic from spilling back onto freeway exit and entrance ramps.

The positive effects of Smart Lights apply to both small and large cities. They can also be used as part of public transportation systems, giving green light favor to busses and other large vehicles that slow down other cars, improving the overall flow. Apps and navigations systems feed real time data to the systems, so that even if only 30% of the drivers have phones or on board navigation systems, the smart lights can adapt the information and improve congestion. 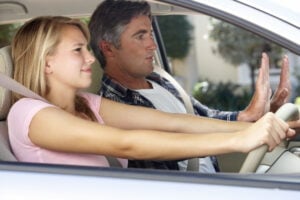 Each new system that gets put into use provides more information and data that gives a better understanding of the conditions that drivers are reacting to, and predicts solutions. As the technology evolves, the lights won’t have to predict possibilities; they will just ask cars where they are going and adapt plans on the fly. This actually has a name; it’s called vehicle-to-vehicle communication (V2V) and it not only allows the cars to talk to traffic lights, but also to each other. The Department of Transportation plans to have V2V standard on all new cars as early as 2017. Audi is already experimenting with a system that can tell you to slow down or speed up to make a light. Wow, sounds like a teenage parents dream come true!