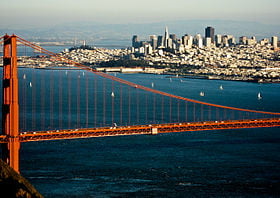 San Francisco is one of the most iconic cities in the world, and for good reason. Images of fog rolling over the Bay and curling up the the bright red, Art Deco towers of the Golden Gate Bridge (the longest suspension bridge in the world),  helped make the city and its many landmarks famous. The city itself was founded back in 1776 when Spanish colonists built a fort and mission. Later, when the California gold rush hit in 1849, the city found its footing and quickly became the largest city on the West coast.

Despite the great fire of 1906, and a number of earthquakes, the city has stood strong. Most recently, the tech boom has brought an even greater influx of wealth.

There is absolutely no way to write a comprehensive list of San Francisco’s innumerable attractions and events. You would have to live here for a year to experience even a fraction of what the city has to offer.

That said, here are some activities of interest to us and, hopefully, to you if you plan to visit the Paris of the West:

The Exploratorium is a must for any science lover. Reopened last year on the Embarcadero, the museum is considered by the NY Times to be the most important science museum in the country. Their stated mission is to change the way the world learns. Housing over 600 participatory exhibits at any given time, from a tactile excursion through total darkness, to an interactive display of live phytoplankton, you could spend an entire week here.

If your interest is in art and history, here is a list of San Francisco’s many other museums including the Cable Car Museum, which not only gives a history of the affordable transportation system, but allows you to watch the machinists at work while they repair and maintain the cars and infrastructure. You also get to see the actual underground cables circling their huge wheels.

The Barbary Coast walking tours will take through an underground graveyard of Gold Rush ships, a den where sailors would get shanghaied, the first Asian temple in North America, and some of the best architecture the city has to offer.

This is just the tiniest of samplings (we didn’t even mention Alcatraz or Coit Tower). Just strolling through the city is enough to satisfy any traveler. The city itself is bustling and gorgeous and there are hundreds of street-side restaurants and food trucks if you’re hungry for some cheap eats.

Also, be careful driving around the city. Some of the hills aren’t very friendly to automobiles (or walkers, unless you’re in really good shape), so you might want to make sure your insurance is current as well.