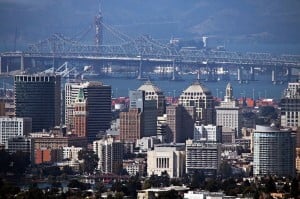 What do Sly and the Family Stone, Jack London, The Hell’s Angels, and Kaiser Permanente Health Insurance all have in common? They all got their start in Oaktown! This East Bay city has an extremely interesting history.

First incorporated in 1852, like many California towns, Oakland had its first boom with the arrival of the railroad. It was the terminus for the Transcontinental Railroad, and the port expanded rapidly. But with all of the legitimate business came the disreputable varieties, such as “oyster pirating,” “shanghaiing,” and various smuggling ventures.

The 1920s brought another boom to the city, and many different manufacturing companies built plants and factories, including a number of automobile companies like Chevrolet and Chrysler. So many cars and vehicles were produced in the city that some called it “The Detroit of the West.”

The ’60s brought about the birth of the Black Panther Party, a number of funk and soul bands (including the above-mentioned Sly and the Family Stone, as well as Tower of Power and The Headhunters), and the Hell’s Angels Motorcycle Club.

During the following decades crime in Oakland increased. Cocaine and other cheap drugs were on the rise, and the Oakland police were involved in a number of scandals.

However, since the turn of this century, Oakland has been experiencing a rebirth of sorts, becoming a gathering place for artists, activists, and thinkers.

–Amelia Earhart became the first person to fly solo from Honolulu, Hawaii to Oakland, California in 1935

-Oakland has been home to a number of famous and culturally important writers, such as Gertrude Stein (her family settled there in 1878), Angela Davis (political activist and critical theorist), Philip K. Dick (science fiction writer), Ishmael Reed (current resident), the poet Robert Duncan, and the novelist Marion Zimmerman.

If you’re in town, check out one of Oakland’s literary attractions: Heinold’s First and Last Chance. This saloon was built in 1880 out of timber from an old whaling ship, and still uses the original gas lights. Jack London used to sit and study here, while listening to stevedores and shipmates tell tales of their adventures, and the saloon is featured in his novel John Barleycorn.