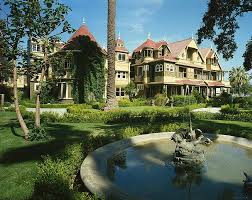 It’s actually really easy to get there. By car, you just take the 101 South from San Francisco! Dionne Warwick didn’t have Google Maps though, so cut her some slack…

Continuing with today’s theme, we thought we would take a look at another of the Bay Area’s most famous cities, San Jose. The self-described “Capital of Silicon Valley” is not a cheap place to live. Home prices have skyrocketed with the tech boom but, nestled right in the heart of the exploding industry, the city still retains some of its old-world charms.

However, residents know that if you take some time to explore, there’s actually a lot to experience. Like most of the Bay’s cities, San Jose is incredibly diverse. For example, the beautifully constructed Gurdwara Sahib, place of worship for San Jose’s Sikh community, is the largest of its kind in the nation.

The Cathedral Basilica of St. Joseph, place of worship for the Roman Catholic community) was the first non-mission parish constructed in California (1803).

There’s also the Mexican Heritage Museum, which features a gorgeous mural depicting the history of indigenous, Hispanic and Latino visual arts. The Portuguese History Museum recreates what life would have been like at the turn of the 20th century, and hosts revolving exhibits that display important events in Portuguese History.

Last but not least is the Winchester Mystery House. Once the personal residence of Sarah Winchester, widow of William Wirt Winchester, rumors of its haunting have been told since it was built in 1884. Whether you believe in ghosts or not, the house itself is a site to behold. It was under continuous construction (under the guidance of Sarah herself) from 1884 until Sarah’s death in 1922 (she believed that as long as she kept building, no ghost would be able to settle there). Sounds like an insurance nightmare to us.

Tours of the house and the grounds show the eccentricity of the late owner. Doors and staircases lead to nowhere, windows open onto other parts of the house, and beautiful Tiffany glass adornments are left in dark storage rooms, never to be displayed (must be an insurance nightmare!).

For the full experience, you really need to visit and see the strange structure for yourself. It will be easy to find, there are billboards for it all over Northern California.