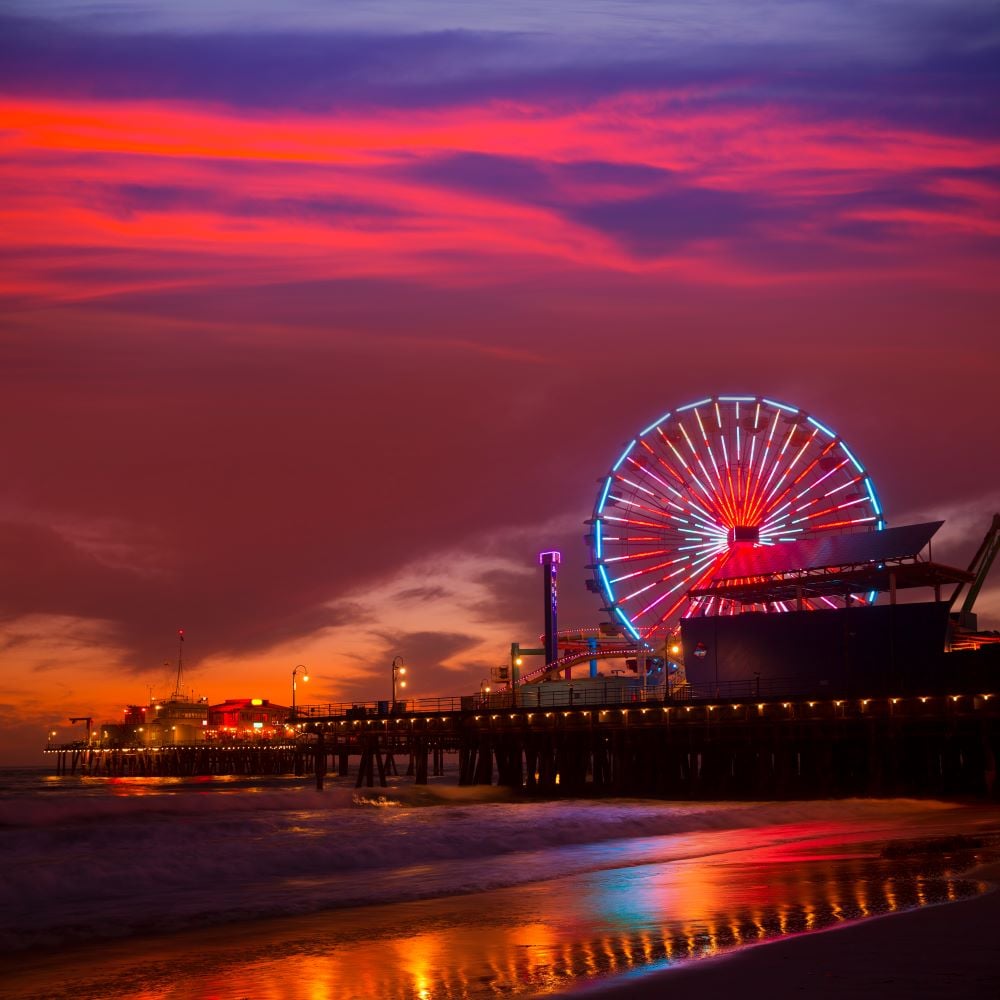 Santa Monica is a beachfront city in western Los Angeles County, California. Located on Santa Monica Bay, it is bordered on three sides by the city of Los Angeles to the north, Brentwood on the northeast, and Venice on the south. Because of the revitalized downtown and the pier, the city sees a tremendous amount of tourist traffic year-round. If you’ve visited the pier or the promenade in recent years, you know how bad traffic can get. Exploring the many options for cheap car insurance available in Santa Monica is the best way to lower your rates.

Santa Monica was long inhabited by the Tongva people. After the Spanish-American War, the US government sovereignty in California began, on February 2, 1848. In the 1870s the Los Angeles and Independence Railroad connected Santa Monica with Los Angeles, bring in an abundance of tourism development. Many hotels and hostels were built, and The Santa Monica Hostel is now Santa Monica’s oldest existing  structure. The Pacific Electric Railroad brought people to the city’s beaches from across the Greater Los Angeles at the beginning of the 20th century. The amusement pier became enormously popular and then the completion of the Santa Monica Freeway in 1966 brought the even more prosperity.

The city is named after the Christian saint, Monica. Santa Monica used to be somewhat of a sleepy beach town, but over the past two decades the population has grown a great deal. It is largely affluent, with a high concentration of Hollywood employees and executives, as well as various celebrities and professional athletes. There is also a large concentration of students. The city has 23% of its workforce in scientific and technical services, and a large amount of game development companies. The population of Santa Monica was 92,987 in 2014. The city is #1 on the list of top 101 cities with the larges percentage of people in arts, design, entertainment, sports, and media occupations.

Crime has been decreasing steadily over the last ten years and Santa Monica now has the same crime rate as the national average, and fatal car crash rates are slightly above national average. It is somewhat  perplexing that the city has 11.8% of its residents living in poverty, yet at the same time it is #1 on the list of top 101 cities with the highest median household income. The median income is $67,060, which is higher than the national average.

The Santa Monica Freeway (Interstate 10) begins in Santa Monica near the Pacific Ocean and heads east, and has the distinction of being one of the busiest highways in all of North America. The city has many public transportation choices to choose from, and many of them are run on alternative fuels! Eighty-two percent of the city’s public works vehicles run on alternative fuels, including almost 100% of the municipal bus system, making it among the largest such fleets in the country. The Big Blue Bus serves much of West Los Angeles and the University of California, Los Angeles (UCLA). A Big Blue Bus was also featured prominently in the action movie Speed. Taking full advantage of the public transportation available in Santa Monica is the best way to save mileage on your car, and money on your car insurance!

The city of Santa Monica has everything from beaches to the great fair like pier. When you have things like this, that means that you have a lot of things tourists can do! You can do many things like private surfing lessons and a private airplane flight over Santa Monica. But the favorite seems to be the electric bike ride through Santa Monica and Venice Beach. You take the tour in a private group with one tour guide. During the tour, you get to experience some of the great views of the beaches. As stated above, the bikes are electric with electric pedals. This means that you get to decide how hard you want to work during the tour. You can do the pedaling all by yourself or you can just cruise.  When the tour is complete, the tour guide allows you to relax and just sit down on the beach and let you experience a beautiful sunset.

It is quite expensive to live in Santa Monica as the average house price listed there is around $1,700,000. Living by the beach in California tends to be way more expensive than living more inland. Santa Monica offers residents an urban feel and most residents do in fact rent their homes due to the drastic prices of them. The market tends to be young professionals that are starting out their career. Also, the surrounding schools are rated really high. Santa Monica is mostly a safe city. This city is obviously a heavy tourist destination with being close to Venice Beach.

Living in Santa Monica is a dream for some people. It can get quite expensive when we are talking about living. The average rent for an apartment in Santa Monica is around $3,926 and that is a 6% increase from the previous year. The year to year change can increase a lot in this area because almost everyone wants to live there.

The average size for an apartment in Santa Monica is around 773 square feet. 90% of people renting their properties are paying $2,000 or more each month. The housing market is somewhat competitive due to its expensive nature. This isn’t a good area for first time home buyers compared to some surrounding areas.