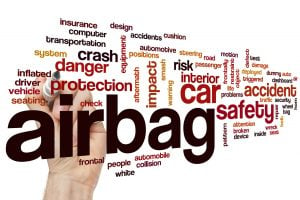 The recall of defective driver and passenger airbags is reaching epic proportions. The NHTSA calls this “the largest and most complex safety recall in U.S. history.” Unfortunately, NHTSA wasn’t even notified properly of the possible issues with the airbags until 2008. What has happened between then and now is the stuff of nightmares. Since then, 11 people have died, and over 100 have been injured; by a device required by the federal government and is supposed to save lives. It wasn’t until 2015 that a nation wide recall was started, and now more than 100 million vehicles with defective airbags need to be replaced by 2019.

The defect in the airbag is inside the inflation device. This device is a metal container loaded with propellant wafers that can ignite and explode with incredible force.  The propellant wafer is the problem, because in contains ammonium nitrate without a chemical drying agent. This part was manufactured by Takata, and was installed in cars from 14 different automakers. The cars with model years from 2002 through 2013 are the ones with defective airbags. During a crash, the inflation housing ruptures, spraying deadly metal shards all through the vehicles cabin.

Has Your Car’s Airbag Been Recalled?

Ok, maybe you’ve heard enough and you just want to know if your car is on the recall list. Well, all you have to do is get your VIN, vehicle identification number, from the lower driver-side corner of your windshield, or from your registration, and plug it into NHTSA’s VIN-Look Up Tool. If your car is on the list, just take your car to the dealer and they will replace at no cost to you.

If you haven’t heard enough, don’t worry, there’s more. The airbags were developed in 1990, but it wasn’t until 2004 that the first incident was recorded. In Alabama, the airbag in a 2002 Honda Accord exploded, creating severe injuries to the drivers neck and chest. Officials were surprised because the drastic injuries were not explainable by the car crash evidence. It was called an anomaly and nobody gave it much attention.

According to the New York Times, by 2007 three more incidents were reported, still nothing. These incidents were settled confidentially by Honda, and in 2008 they issued their first safety recall for about 4,200 cars. As more incidents were reported, more cars were recalled. Takata then filed an official report, but the report did not include the injuries and fatalities that had happened so far. The reports were portrayed so benignly that federal investigators opened and then closed the investigation before more serious incident accounts had been filed.

In 2009 a woman driving with her three children in a Honda Accord hit a mail truck. The propelling shrapnel that exploded from her airbag created injuries on her neck and chest. She bled to death in front of her children. Just last month on October 20th 2016, the 11th fatality occurred. The vehicle was a 2001 Honda Civic that was recalled in 2008, but had not yet been repaired. 9 out of the 11 reported deaths have occurred in the U.S., and there are more than 300,000 cars that have been recalled but not yet repaired or accounted for.

In another incident in 2009, an 18 year old girl was killed when her 2001 Honda Accord was in a minor crash. The airbag exploded, causing fatal injuries to her neck and chest. In June of 2013 a low speed accident in Los Angeles detonated the airbag in a 2005 Honda Accord, throwing hot plastic and metal shrapnel all through the inside of the car. After two air bag ruptures in Japan, Toyota issued it’s recall for all their cars that could have had the potentially exploding airbags installed.

Who Is Responsible For The Defect?

The New York Times reported that officials and regulators in the United States and Japan said they could not explain why the ruptures continued to happen over this extended time period. In 2013 they also reported that Takata had responded with ambiguity to questions about the airbags from BMW. A short time later they then turned around and acknowledged there was a problem after all. After Takata’s report, BMW and nine other automakers also issued recalls. Shortly after that the federal investigation of the defective airbags began.

All of this doesn’t mean that airbags in general are dangerous. Between the years of 1987 and 2012, frontal airbags have saved over 37,000 lives, according to the Department of Transportation. NHTSA says that automakers are responding appropriately and recalling all vehicles that have this airbag. It still seems that some people either have not been notified, or if they have, they have not had the repair done.

Consumer Reports recommends a national approach to this problem, especially since many used cars tend to travel across borders. Consumer Reports web site is also an excellent source to all of the information to date that has been made public. Officials recommend checking to make sure your vehicle is not on the list of cars with the defective airbags. Even if it is not on the list, it is a good idea to make sure your cheap car insurance policy is up to date with the best insurance coverage you can afford.