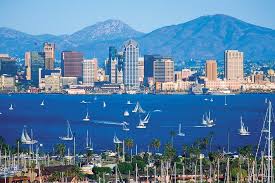 **Here at CheapInsurance.com, we periodically post articles about some of our favorite cities, pointing out attractions and events that we (and hopefully you) find interesting.**

OK, so if you’re living in one of the many states affected by the Polar Vortex, this article might cause pangs of jealousy. But of course, if you’ve ever met anyone from San Diego, California you already know that they like to talk about their weather. After all, “America’s Finest City” boasts an average temperature in the winter that hovers around 65 degrees Fahrenheit. For those of you still snowed in, hopefully just thinking about a visit will be enough to keep some of you warm.

So, consider that fair warning. The rest of this article is about sunshine and warm-weather fun.

Winter is a great place to visit San Diego, not only because of the weather, but because of the annual Gray Whale migration. Every year, up to 20,000 of these whales make the journey from Alaska down to Baja. For a cheap outing just drive up and down the coast! With over 70 coastal miles along the whales’ route, San Diego is one of the best places for whale-watchers, and there are many boat tours that will get you closer to the action.

If you’re in town towards the end of January, and are a golfer or golf fan, take a detour to La Jolla, California (just a few miles north of San Diego) for the Farmers Insurance Open. Tiger’s the defending champion, and will be facing off against Phil Mickelson, Adam Scott, Rory Mcllroy, among others at the picture-perfect Torrey Pines Golf Course.

Once you’ve had your fill of Kayaking(right on the ocean!), Bi-planing(they even let you take the controls!), Segway-touring (hey, we don’t judge), and even Jet-packing (Seriously?), head down to the Gaslamp District for one of the Murder N’ Mayhem Mystery Tours. Part walking tour, part murder-mystery, these tours will take you through the most famous and historic parts of the city, but with a unique crime-inspired theme (Mafia, Pirate, etc…).

Last, but not least: Beer. With over 50 different breweries, San Diego County ranks among the most beer-friendly in the nation. The most famous are probably Stone Brewing Co. and Karl Strauss, but don’t worry, if you want to try something new, just pop your head into one of the city’s hundreds of pubs and bars. You are almost guaranteed to find a brew on tap from one of the smaller, local micro-breweries.

The downside to having such a great beer and wine culture is the increased risk of DUIs. At one point San Diego ranked highest in the nation in the number of drunk driving offenses. Because of this the city launched a number of programs to encourage safe driving and responsible drinking. Most of the beer and wine tours provide transportation, and there are a handful of businesses that will act as designated drivers, even picking up your car, so you can have fun without worrying about how you will get home.

So, as you can see, San Diego is more than just sun and waves. The city has a ton of personality, and a limitless amount of activities and events. Next winter, before you get snowed in, hop on over to the Left Coast and see what all the fuss is about.