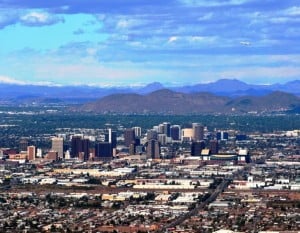 Sunny, sometimes sweltering, Phoenix. This subtropical metropolis is the most populated state capital in the nation, slowly spreading across the Sonoran Desert since its founding around 1867. In the 1880s, the railroad came to Phoenix, bringing a new level of commerce. The Roosevelt Dam, completed in 1922 as part of the National Reclamation Act, ensured that the city would continue to thrive.

Before the arrival of the American masses, the Hohokam people had settled in the area for almost 2000 years, turning the dry land arable by digging 135 miles of irrigation canals (some of which are still in use). Drought eventually forced the native population elsewhere, leaving only ruins and echoes of  their culture and civilization. Some of their ruins can still be seen (and explored) at the Pueblo Grande Museum Archaeological Park. Open 7 days a week, the museum attracts visitors from all over the nation. A short hike will take you through a prehistoric archaeological village site, complete with replicated homes, an ancient ballcourt, and an excavated platform mound. Children will also have a chance to get hands-on, learning about archaeological science and techniques.

If you want to learn more about the local Native culture and art, drive down to the Heard Museum. Founded in 1929, the museum’s mission is to educate the public about Southwest native civilization, featuring ancient artifacts as well as contemporary Native art.

There are plenty of other museums in the Greater Phoenix metropolis, but if you’re driving through the desert, maybe listening to late night A.M. on your car radio, you might find yourself scanning the skies. For good reason. After all, in 1997 thousands of people reported seeing a strange triangular light formation hovering over Phoenix. Known as the “Phoenix Lights,” and rumored to be visiting UFOs, these unexplained sightings crossed the state from the Nevada line to Tucson. Sure, they may have been flares dropped from a passing A-10 Warthog during training exercises, but that’s probably what they want you to think, right?

You never know what you might see, or find, in the desert. You might even stumble upon Night Vale. It won’t be cheap, but keep your air-conditioner running. We’re pretty sure they call it the Valley of the Sun because it gets hot.

Read our article: Different Penalties by State for Driving a Vehicle Without Insurance

Tagged Valley of the Sun