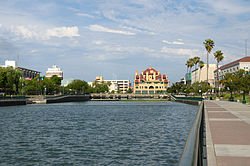 Stockton has taken a lot of cheap shots over the last few years. Rising crime rates, car thefts (resulting in higher insurance costs), coupled with a bankruptcy filing in 2012 and one of the highest home foreclosure rates in the country, brought a lot of negative press. However, new sales taxes and government initiatives over the past year have helped decrease crime and steer Stockton onto the road of recovery.

Despite the negativity surrounding Stockton in the media, we at Cheap Insurance took a deeper look at “California’s Sunrise Seaport” and found a lot to love about the city.

Since 1850 Stockton, named after Robert Field Stockton, has served as one of California’s most important transportation hubs. During the Gold Rush, Stockton attracted settlers from all over the world, including Asia, Africa, Australia, Europe, the Pacific Islands, Mexico and Canada. Today this diversity is apparent in Stockton’s architecture, street-names, ethnic festivals, and in the population itself.

Some cool things to see when you visit:

-The Haggin Museum, located in Victory Park,  has a number of galleries with a large collections of paintings by artists such as Renoir and Inness. They also have a collection of panoramas (mostly of Yosemite) by Albert Bierstadt. Take a look at their calendar of events to see what else they are offering during your visit.

-The Stockton Asparagus Festival runs every year in April and features local produce, wines, beers, and other foods. Be sure to try the Asparagus ice-cream (made locally by Gleason’s)!

So, in conclusion, don’t let the media sour you on Stockton. After all, if it was good enough for Huell Howser, it’s definitely worth a visit.