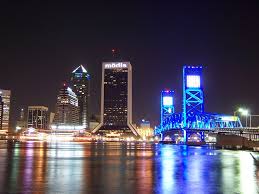 Jacksonville, Florida has weathered the economic crisis better than many US Regions, in part due to its balanced economy, with services spread among insurance and health care, distribution, manufacturing, biomedical technology, IT, and others. Tourism (especially golf tourism) has also played a significant part in Jacksonville’s stability, helping the city rank as  “high-sufficiency” (not obviously dependent on any other global city).

Jacksonville has quite an interesting skyline. Most notable is the Wells Fargo Center. Resembling a fancier version of the Monolith from 2001: A Space Odyssey, this sky-scraper was completed in 1974 by the Independent Life and Accident Insurance Company, and dominates any panorama of “The Bold New City of the South.”

Other architectural landmarks include the Riverplace Tower, the Florida Theatre, Epping Forest, and the St. James Building.

If you’re in the mood for some outdoor sight-seeing, there’s also the famous Friendship Fountain and the Treaty Oak (the single oldest living thing in Jacksonville). A trip to the Jacksonville Arboretum and Gardens or the Tree Hill Nature Center gives tourists a chance to see a variety of local flora and fauna (including quail, armadillos, alligators, Chestnut and Magnolia trees, etc.). Visitors to either preserve can take advantage of the numerous trails, exhibits, and events that celebrate Florida’s wildlife and local history.

The Jacksonville Jazz Festival is the second-largest of its kind in the nation. Many of the jazz greats have played there over the years, including Dizzy Gillespie, Branford Marsalis, Count Basie, and Miles Davis. It takes place in May, if you’re planning a visit.

For the nautically-minded, the Jacksonville Maritime Heritage Center presents a history of maritime trade, exploration, and warfare. The museum has a number of large scale models of various ships, including the Mayflower, the Titanic, the USS Louisville, as well as a collection of ship-related artifacts dating back to 1562 (including diving gear, anchors, and navigation tools). Admission is cheap ($3 for adults), so there’s no reason not to check it out.

If you know of anything else we should mention, feel free to leave us a comment below, or on our Facebook page!