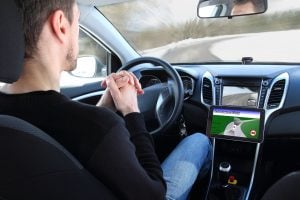 An online survey of over 2,000 US and UK consumers was conducted by Accenture in 2011. The asked those consumers if they would be comfortable using a “driver-less car.” 46% said yes, they would. J.D. Power and Associates also did a survey in 2012, finding that 37% would be interested in purchasing a fully autonomous car. Insurance.com did a phone survey in which ¾ of the licensed drivers said they would consider buying a self-driving car. That number increased to 86% if the car insurance on the vehicle was less expensive. There is no question that autonomous vehicles will be a part of our future society, but how much will it be integrated, and what will cause the resistance. Looking at the history of the autonomous car, and evaluating the present state, will give us a better understanding of where we are headed.

Experiments with automating cars have been around since 1920, and the first promising trials were in 1950. In 1980 the first truly autonomous car was designed by Carnegie Mellon University. Since then, working prototypes have been progressing from many major companies. By 2013 four states, Nevada, Florida, California, and Michigan, have passed laws allowing autonomous cars in certain public venues. One of the biggest and most exciting steps forward in vehicle autonomy was the DARPA (Defense Advanced Research Projects Agency) Grand Challenge.

The challenge required teams to build autonomous cars capable of driving in traffic and performing complex maneuvers. The DARPA Urban Challenge was held on November 3, 2007 in Victorville, California. What made the event groundbreaking was the fact that the cars had to interact with both manned and unmanned traffic in real urban environment. They also had to obey all traffic signals and merge into traffic. 6 out of the 11 vehicles finished the challenge successfully, with Tartan Racing from Pittsburgh coming in first, Stanford Racing Team second, and Victor Tango from Blacksburg coming in third. This competition gave the world a realistic view of autonomous cars working on real streets.

From here, auto companies have taken over the production of working prototypes and testing them. In 2015 and 2016 Tesla released a version of cars that can be classified between level 2 and 3 under the NHTSA five levels of vehicle automation. (See previous blog for levels, as well as the setbacks Tesla experienced). At this level, the car still needs the full attention of the driver, but autopilot can be uses on limited-access highways. In 2015 Delphi Automotive designed the car that was the first automated vehicle to finish a coast-to-coast expedition across North America. It was computer controlled for 99% of the trip from San Francisco to New York.

Also in 2009, Google began its driver-less car project and had logged over 2 million miles on the road by 2015. In Singapore in August 2016, they launched the first self-driving taxi service designed by nuTonomy. On September 14, 2016 Uber began providing users in a specific space of downtown Pittsburgh a ride in a self-driving car. The car does have a human engineer at the wheel to take over just in case something unusual happens. This unique approach provides regular everyday people to begin experiencing what it’s like to be in an automated car, and to see them on the road. Uber is a San Francisco born company and chose Pittsburgh because if offered a variety of test situations, like narrow streets and diverse weather. The residents there are also passionately high tech.

Our induction into the autonomous vehicle revolution has begun. The use of autonomous vehicles is expected to catch on the same way mobile phones did. At first, it might seem like a luxury that only the rich can afford. Then over time, it has eventually become the necessity no one afford to do without.