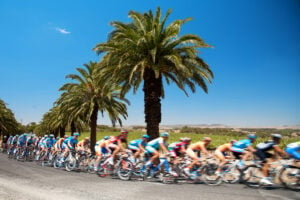 The 12th edition of the Amgen Tour of California is an annual professional cycling race that is gaining more notoriety every year. This year’s race is very special, as the event will jump to the level of World Tour for the first time. This is a Tour de France style race that draws the top professional cycling teams from all over the world. The course will pass through hundreds of miles of California’s iconic highways and coastlines. Sacramento, Modesto, San Jose, Santa Barbara, Santa Clarita, Ontario, Mt. Baldy, Big Bear Lake and Pasadena, will be important stages in the race, bringing lots of excitement  and plenty of traffic. If you live in or near any of these cities, or are planning to travel in the area around May 14 to May 17, 2017, make sure you are prepared with adequate car insurance coverage, including collision and uninsured motorists. Having so many bikers on the road will cause a lot of traffic, from spectators as well as those already living in the areas.

The Amgen Tour will be a dramatic and exciting event, and for the 13th year Santa Clarita will be the host, as it has been for the previous nine years. The city has a special web site set up just for this event, which shows just how important this event is to the city. The site not only has information on the race, put also a traffic page. This is a great tool to use to plan ahead if you live in Santa Clarita. A racing bike in this kind of race can cost $4K and up, which makes it especially important that you have your comprehensive car insurance up to date.

The 7 day race covers almost 700 mile of demanding mountain passes, grand coastline views and intense sprint finishes. It will also be a chance for the spectators to explore each city during the week long race. Making this event part of the World Tour calendar will attract more star power riders, like Peter Sagan. In 2015 he was the overall Amgen Tour of California winner, and holds the record for the most stage victories since 2010. Having the race be part of the World Tour gives it the distinction of being the only stage race in North America of its kind. The upcoming race will also be the tenth consecutive year that a women’s competition will be held as part of the Amgen Tour of California

The event is sponsored by Amgen, one of the world’s leading independent biotechnology companies. Raymond C. Jordan, senior vice president of Corporate Affairs at Amgen states that, “Our sponsorship of the Amgen Tour of California gives us the opportunity to help patients impacted by cardiovascular disease and cancer take charge of their disease. The Breakaway from Heart Disease and Breakaway from Cancer initiatives give patients and their loved ones vital education and resources to help them through their journey”.

The prestige and visibility of this year’s race will help elevate the status of racing in the U.S., and will create more fans, more funding, and more growth. For more information and resources visit the Amgen Tour of California website. You can find all the dates and times for each stop the riders make, as well as live updates on race results. If you live in Santa Clarita, or any of the cities on the tour, be ready for even more pandemonium then last year. World Tour status will bring in many positive things, but traffic won’t be one of them. If you have not reviewed your car insurance policy in the last six months, now would be a good time to do so. Make sure you ask about recent discounts or other ways you can save on car insurance. Then go enjoy the show, knowing you have all the protection you need.